The annam, annapakshi or hamsa as it is variously referred to, is a recurring motif on a Kanjivaram sari, drawn from the sculptures of ancient traditional art and incorporated into temple sculpture and Hindu iconography. It is a mythological bird representing a messenger of love and peace, resonating as a dove in the Western world. The celebrated poet Kalidasa’s epic poem Kumarasambhava refers to a garment as Hamsa Dukula, describing the bird as a feature of decoration on the heroine’s wedding sari, which is symbolic to spreading love and peace.

Ganda-Bherunda – or the two-headed eagle

The two-headed eagles present in imagery across civilizations for centuries, and had the Kingdom of Mysore recording the picture of ‘Ganda-Bherunda’ as one of the insignia and titles of the Royal Wadiyars. It came on Vijayanagara mints and soon moved into textiles as woven motifs. In the Kanjivaram fabric, this mystical bird motif takes on a regal splendor woven in rich gold zari and coloured silk yarn, symbolizing victory. 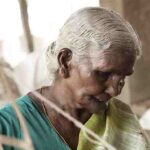